History of the Mankato Fire Department

History of the Mankato Fire Department 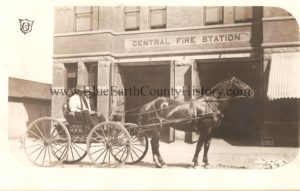 The origins of that effective shield against the ravages of fire, and of flood, in Mankato date to some appropriate action taken in 1860, on April 6 to be exact, by practically all of the leading men of the community.  Banded together to form Mankato Hook and Ladder Company No.1, a volunteer fire company, were such names as Jaspar Shoemeker, J.P. Brink, Z. Paddock, W. Maxfield, and William Irving.  In the 1880s, a second volunteer company was formed in West Mankato.  Hook and Ladder Company No.2 used the rear of Hallman’s store at Hubbell and West Front for its equipment for some time before moving to the triangle of land bound by Sibley, West 4th and West Front.  Mankato’s first “pumper” dates to 1866; it was operated by four firemen manually and was pulled by horses.

In the old Central Fire Station on South Second, leather buckets, painted red, hung along the wall, waiting to be loaded onto the horse-drawn Hook and Ladder Wagon No. 1 and to be used by the fire brigade.  Fire Chief in 1905 was “Doc” Beach, an early blacksmith and carriage maker.  Mankato’s first mechanized fire truck was a 1913 American LaFrance, the very latest in fire fighting equipment.  The Department bought a 1916 Buick truck which they used as a chemical fire truck until 1948 for hard to extinguish fires.  When Ben E. Bangerter was Fire Chief in 1939, the Department invested $50 to build a water cannon, designed by the Chief and built by the firemen.  It was mounted on two wheels with rubber tires.  The rig could be handled by one man.

With the closing of Central Fire Station, Mankato acquired two new fire stations, No.1 on Madison Avenue and No. 2 on State Street, soon to be followed in 1992 by Station 3 on Balcerzak Drive.