Ski Haven or Mount Kato, A great place to Ski

Ski Haven or Mount Kato, A great place to Ski 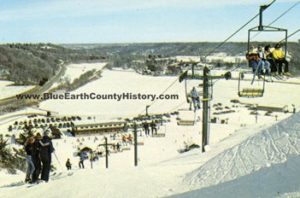 Whether it is called Ski Haven or Mount Kato, either name refers to the ski hill just south of Mankato on Highway 66 (now Highway 1).  In existence since 1937, it is the most southerly ski hill in Minnesota, and the largest in a radius of 70 miles.  Harvey Andersen bought the land in the 1930s, looking for a place for ski jumping.  Andersen was better known for his canoeing than his skiing.  He formed the Blue-Minn River Canoe Club in the early ’20s.  Among his canoeing exploits was a solo trip from Mankato to New Orleans in 1922-23 in a little over two months, and canoeing from the beginning of the Mississippi River to Minneapolis with his friend Fred Hanson in paddle derbies.  But it was his search for hills for ski jumping that lead him to purchase the acreage, known as Andersen’s Hill until the mid-’40s.  Jumpers had used the hill at the end of Belgrade Avenue and near James Avenue until the surrounding areas were too developed.  Five graduated jumps were built on the newly-purchased hills, the biggest at 125 feet, sliding 800-900 feet on wooden boards.

Jumping was not the only activity.  However, no matter how you came down the hill, you had to walk back up for another run.  The first tow line was built in 1945, using a Buick engine and hemp rope.  The rope was known to eat gloves and, if you did not let go in time, it would drag you into the tow shed.  Eventually, a mattress was nailed to the shed for more comfortable stopping.  The first chalet was begun in 1952, a log cabin built using telephone poles.  A second lift was installed in 1954.

Harvey maintained the equipment, and entertained with his storytelling, harmonica playing, and yodeling.  His wife, Dolly, sold tickets and ran the snack bar.  There were homemade cookies, baked after closing, chili and barbecues.  Her “secret recipe” for barbecue was eventually made by Randall’s Super Valu, but she still doctored it a bit.

Twelve to thirteen weeks of possible skiing were a hard way to make a living, with weeks when it was too cold, too warm, too much or not enough snow to ski.  1951 was a good year for skiing, with plentiful snow, until the spring melt flooded the chalet.  The Andersen’s never intended to make a profit with the hill, and Harvey worked as an electrician, owning Andersen Electric.  Son Jim opened Jim’s Sporting Goods Store in 1964 to help fill the demand for ski equipment, and keep up the interest in skiing

The ski business was incorporated in 1966-67, bringing in shareholders.  The back side of the hill was purchased.   Runs and lifts were added, rope tows electrified, snow-making and grooming equipment improved, and a new chalet with ski rental equipment built.

Afton Alps bought the facility in 1977, renaming it Mount Kato.  Ski and snowboarding lessons, race leagues, a Terrain Park for tricks, ski/snowboard patrol, and mountain biking in the summer are all available.  The Mankato Area Adaptive Ski Program has provided ski experiences for those with disabilities since 2000.

Today a visitor will find nineteen trails, ten chair lifts, and a tubing hill, but no ski jumps.