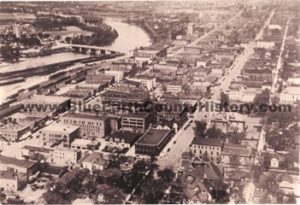 The process of how Mankato garnered its nickname of Minnesota’s “Key City” was not prompted by any city, chamber of commerce or tourism-based group’s suggestion, but rather resembled a round table discussion at a diner over steaming cups of coffee. The nickname contest was orchestrated by the Mankato Free Press throughout the months of August and September 1925, and it held the attention of towns throughout Blue Earth County and as far as Faribault, Fairmont and Rochester, MN. The Mankato Chamber of Commerce eventually took over judging duties and announced the winner on October 5, 1925.

According to the newspaper, Mankato stood as the only town in Minnesota without a nickname. Having one would give the city “an air of romance.” Indeed there seemed to be a fairly strong call for inclusion of “royal,” “crown,” “queen,” or “king” in early submissions to the Free Press’ contest. There was also a substantial contingent who wanted to play up Mankato’s various industries, including its colleges, marble quarries, creameries, and flour mills, with a few submissions vocalizing the superior quality of flour produced at R. D. Hubbard’s company and its significance and history in the region.

Yet the predominant theme throughout the contest was a geographic focus in nickname suggestions that emphasized the natural beauty of the area, creating idyllic imagery of dual wooded river banks arrayed with flowers amongst rolling hills of the valley. For example, neighbors Mrs. Fremont C. Pew of 210 Van Brunt Street and Miss Frances Blake of 211 Van Brunt Street suggested “Valley” and “River City” respectively, Blake remarking in her letter to the editor that the “scenery cannot be surpassed even along the banks of the Danube or Rhine Rivers.”

However the winning submission of “Key City” came from Mrs. Emma F. Davis of 220 Center Street. It had been originally suggested 14 years previous at a state Sunday school convention, but Mrs. Davis reiterated its significance, as the connotations of the word “key” could stand for the industrial and trade connections Mankato provided throughout the state and greater national markets, as well as its geographic placement and symbolic relation to southern Minnesota within the borders of Minnesota, when viewed as a lock. Mrs. Davis won first prize and a monetary sum of $10 for her suggestion (approximately $130 today).