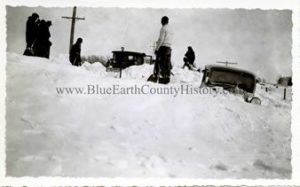 Old timers like to tell stories of “the worst winter” they can recall—the 1935/1936 record breaker.  That winter truly was a record breaker, but only in the number of continuous below zero days.  There was nothing record-setting in the snowfall, many winters before and since have netted much more snow.

Perhaps an omen of things to come happened on November 1, 1935.  The Free Press reported, “Mercury Fails to Rise Above Freezing Point.”  Cool for early November.  Next week a cold wave moved in, but the weather fluctuated warm and cold.  November 22 saw the first sub-zero day.  December had some very cold days, minus 16 degrees the lowest, but the month ended fairly mild.  And there were no blizzards yet.

January 1936 gave no indication of record cold over the first eleven days, and no remarkable snowfall.  But from January 12 to February 22 nightly mercury readings registered below zero except twice, and one of these was zero degrees.  In fact, the mercury never reached plus values from January 19 to 28.  We saw minus 38 twice, and two more lows were in the minus 30s.

Heavy snow came at least twice in the winter, eight-inch snowfalls.  Winds caused blowing snow and blizzards a number of times.  The intense cold made the snow easy to blow around.  Railroad trains and highway traffic were slowed or even interrupted several times.  The U.S, Weather Bureau, reporting from Chicago, stated that January claimed at least 450 lives.  Wild animals fared badly.  Lashing snow and the sting of bitter cold played havoc with the pheasant population.  Their wings were cluttered with snow and ice.  Even pets were unable to stand severe outdoor temperatures.  They developed pneumonia easily.  By January 27 the American Falls at Niagara was stilled for at least three days by a solid ice jam.

By March first the cold weather was over.  A rapid thaw set in by mid-March and we had some minor flooding in West Mankato.  North Mankato had a few tense moments defending the Webster Avenue dike.  The mid- and late-summer compensated for the terrible winter.  Most people agreed the summer was “hotter than Hades.”