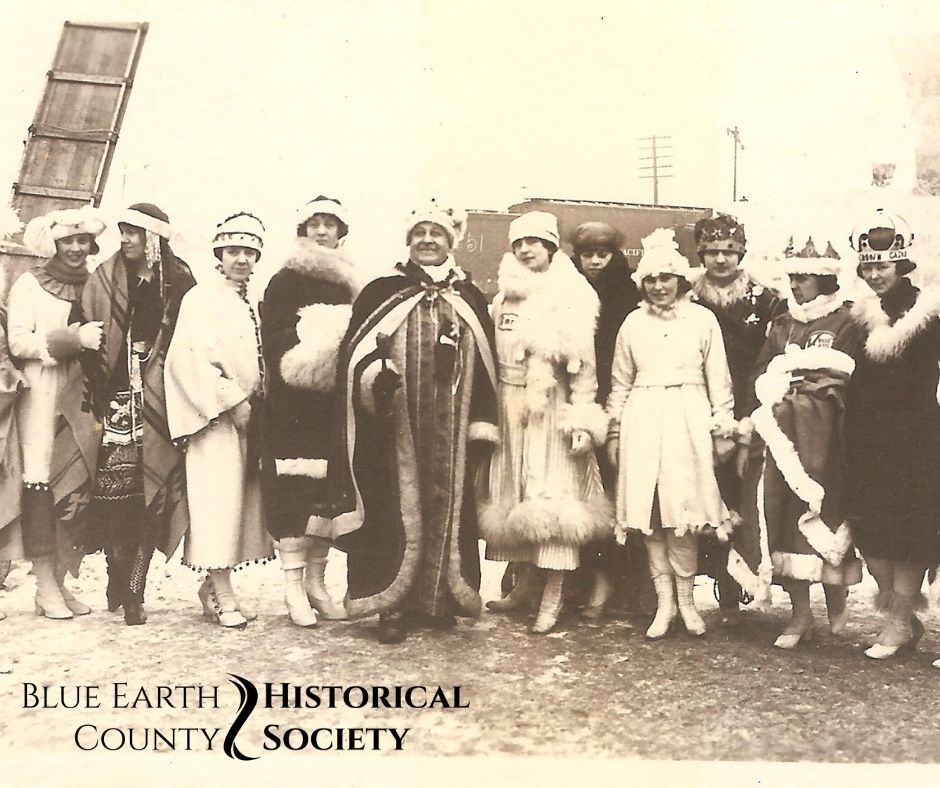 The Mankato Winter Carnival of 1920 was an event like no other. Never before had Main Street been converted into a toboggan run, a float pulled by 100 horses been paraded through the town, or a monarchy ruled over Mankato- and it will likely never happen again. The event lasted five days and will go down in Mankato history as one of the most cheerful occasions the town has ever seen. This was due chiefly to the energy and efforts of the Carnival Court. A King, Queen, various club queens, and attendants were selected to serve. During the week of the Carnival, the court ruled over the town ¨subjects¨. This Court initiated a week of fun, excitement, and shenanigans.

The search for the Mankato Winter Carnival Queen took place over nearly two weeks. Various girls entered or were nominated for the contest. The competition was fierce and highly publicized. At the end of a close match, Pauline Koke came out on top, winning herself the title of Mankato Winter Carnival Queen. The role was not just a beauty contest, however. The Queen candidates put in a lot of work advertising and campaigning for the carnival. After Queen Pauline had her coronation, she had a busy few days ahead of her. Donning plush robes of fur she kicked off various events and took part in parades, among other tasks.

No Queen is complete without her King. Ferd Hoerr rose to the occasion and became King Ferdinand Rex. As King, Ferdinand was never bored. The five days were brimming with tasks to complete. Some of his many duties included taking part in parades, advertising for the carnival, receiving visitors, and knighting nobles. One of the most notable names he bestowed upon one of his subjects was the title “Valet of the Royal Cow” given to Henry Krause. Not all duties the King faced were fun, however. One Free Press writer: Felix McKusick, had wronged the King. He was playfully brought before the King in his ice palace. For his crimes against the crown, Felix was sentenced to ¨…be made to read his own editorials for the period of one week. May God help him.” If anything can be learned from the Winter Carnival of 1920 it can be inferred that the locals had a good sense of humor.

Together along with their Court, Queen Pauline and King Ferdinand ruled from their icy castle erected behind the Union Station Depot. With thick bricks of ice, an amazing structure was crafted. The castle was equipped with a throne and pedestal for the court to stand. This was where the Queen had her coronation and the court members were knighted. It was a marvel that astounded visitors and radiated winter fun. The events of the day were kicked off here and likewise concluded here.

Although the Winter Carnival was never repeated it serves as a fascinating milestone in Mankato’s history. Due to the efforts of the Carnival Court and countless volunteers, Mankato became a Winter Wonderland that the city can never attempt to recreate.

Purchase this Program about the Mankato Winter Carnival from our Videos on Demand.

Learn about the Mankato Winter Carnival in a Minute!