Hunting as a sport has been a long tradition in the United States and the world. Mr. W.G. Gresham, who was an early pioneer in Nicollet County, settled a claim at Swan Lake in the 1850s.  Later he became a judge in St. Peter.  The judge was an avid hunter through his lifetime and learned the sport of hunting waterfowl at Swan Lake from Indian chiefs Shakopee and Red Iron (both prominent in the Dakota Conflict) and Sleepy Eyes (who was always friendly to the settlers).  In addition to the usual hunting of ducks and geese, they sought the brant and swan—now long gone.  If one tries hunting waterfowl nowadays, one finds that there are hordes of hunters and relatively few birds.  On opening weekend, after the opening barrage of gunfire, a cloud of waterfowl may erupt from the wetland.  But soon, during the afternoon perhaps two ducks may come over.

Game laws have certainly changed to adjust to the existing bird population.  In 1909 there was a season for turtle doves, snipe, prairie chickens, grouse, and wood cocks.  Duck season ran from September 7 to November 7; pheasant, quail, and partridge, from October 1 to December 1; aquatic birds, from September 7 to December 1.  The limit was 15 birds a day.  Dove season over the years was off again, on again.  Only recently a season re-appeared—the first time in 40 years.

In 1921 County Auditor C.L. Kennedy issued 73 small game licenses.  The oldest recipient, aged 68.  There were a fairly large number of women hunters.  J.D. Humiston, the 68-year-old, recalled days of hunting with a muzzleloader.  The fee was $1 for residents and $2 for non-residents.  The Mankato Review in 1918 reminded Minnesota hunters that duck hunting from airplanes would not be permitted, as it was in Texas.  Fox hunting from aircraft in 1945 on one February Saturday in Watonwan and Blue Earth Counties netted 30 animals.  The snow helped to spot the fox.

Wild turkey, not indigenous to Minnesota but stocked by the DNR, became a very popular sport, as seen by the harvest records: 94 birds in 1978, 674 in 1988, and 5132 in 1999.  Wolf hunting, of course, has passed into oblivion, but in March 1923 the Mankato Ledger reported that a big timber wolf was bagged by three men in Lime Township.  But the hunt came at a heavy price: of the four dogs used, one was killed by the wolf and two injured.  The latest report of the shooting of the now-federally-protected wolf came in 1992.  A hunter near Lake Crustal confused the wolf for a coyote. 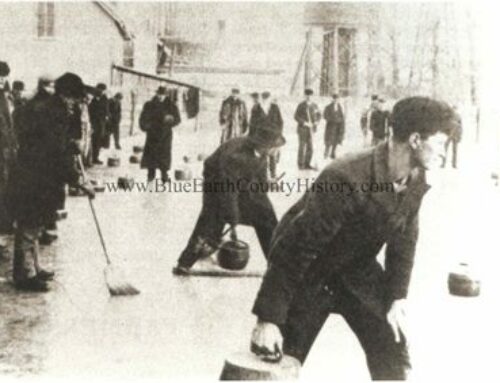