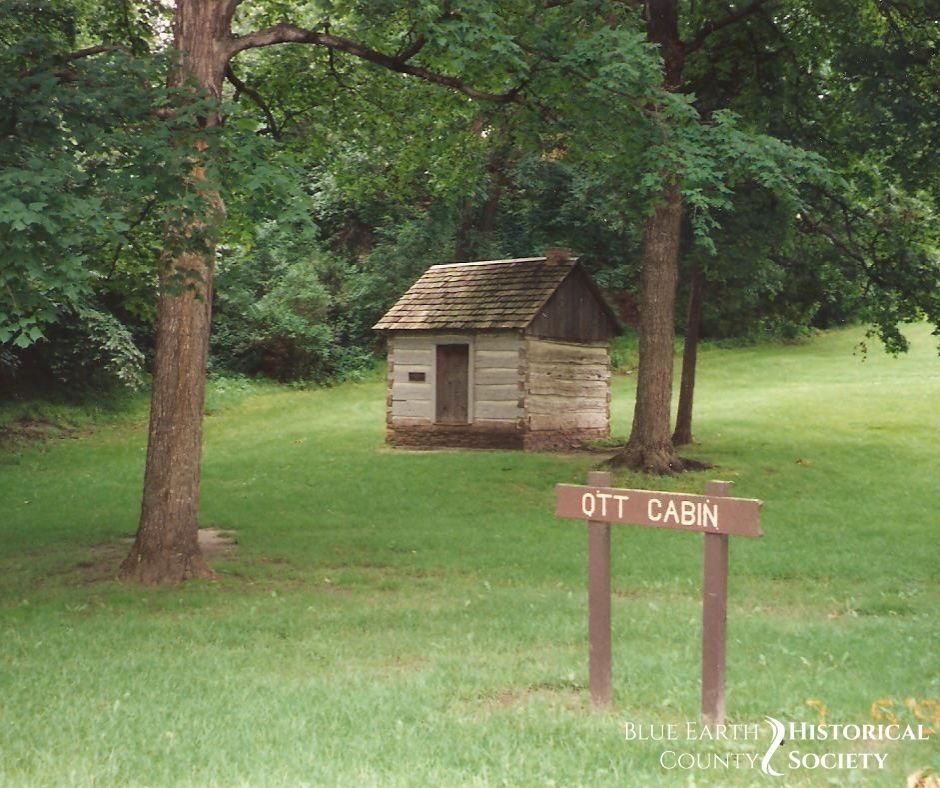 What do people think of when they think of the Ott Cabin at Sibley Park? In Blue Earth County, when someone thinks of historical places, places like the Hubbard House, the Lincoln Park area, and the Dakota (Sioux) Memorial may come to mind. Many of us see them every day. However, yet another site that some of us may see regularly may not come to mind. It’s right in Sibley Park: the George Ott Cabin.

The George Ott Cabin was built in 1857 by George Ott Sr.; one of the earliest settlers of Mankato. He came to Minnesota territory from Indiana in May of that year, with his wife and children. Ott had heard that Minnesota’s weather may be better for his health than Indiana’s, as he had a “climatic illness”. The cabin was originally built on the “St. Clair Road”, most likely today’s County Road 83.

Ott built the cabin and several other buildings with help from his children, as well as neighbors. He secured the help by organizing “log-rolling bees.” The boards for the floor and roof were finished in the local sawmill, run by Moses O. Bennett, and the nails were made by Joshua Ady, a blacksmith sent by the government to aid the Winnebago Indians at their nearby reservation.

Neighbors were known to stop by Ott’s cabin often, discussing their prospects in this new state of Minnesota. Times were very hard; Ott often went to gather ginseng with his wife, but even that sold for very little. Luckily, he was an expert marksman – this skill helped keep the family from starvation during the winters.

As soon as he was able, he cleared five acres of land and planted corn. This especially helped the family. To the east of his land, Ott came upon a meadow, which he used to make hay to feed his livestock. However, even this was a dangerous task, and he risked his life in doing it. Rattlesnakes were especially plentiful back then, especially in meadows.

During the Dakota Conflict, the family temporarily abandoned the cabin, seeking refuge in “Ackerman’s town”, somewhere between Madison Lake and Elysian. They were still gone in May of 1863 when the Winnebago Indians were being moved to South Dakota. The government officials had driven the Indians near Mankato, where they came upon the abandoned cabin. They got water from Ott’s well and ate dinner in a nearby knoll. After dinner, they came together in a large dance, frightening nearby Mankatoans. After this, they resumed their journey, taken by steamboat down the Minnesota River.

Moving back after the conflict, Mr. and Mrs. Ott lived out their lives at the farm. George Sr. died there in 1902, survived by his wife and four children. His wife Mary (nee Ringer) also died there, in 1907. Her obituary notes that she was at that time a grandmother of twenty and a great-grandmother to twenty-three.

The family’s land was divided between the children after the deaths of Mr. and Mrs. Ott, and their daughter Barbara Schostag became owner of the part of the land with the cabin on it. Upon her death, the land went to her daughter, Mrs. John Strobel.

In early February of 1917, the Blue Earth County Historical Society wrote in the Mankato Ledger that they were looking for someone to sell them a log house to put on the grounds of Sibley Park “with other relics of the early days in this city and county.”

Quite a few years after this announcement in the Ledger, around 1930, a delegation from the Old Settler’s Association came forward, headed up by a Mr. Clement Nachbar. They had a goal of preserving and restoring the Ott Cabin. This goal began to be realized when the Strobel family donated the cabin to them. After that was done, the Association persuaded the Historical Society to undertake the project of moving the cabin to Sibley Park and restoring it.

By February of 1932, this had been done. The cabin was at its present location, on the site of the fur trading post run by General Henry Sibley, and repairs had been completed. The cabin would soon be open for visitors to come, look and learn, both inside the cabin and outside. Several articles of historical value were placed in the cabin, including an ox shoe and wolf trap made by Joshua Ady, a saw used by Mr. Ott, and a shell likely fired by government troops at nearby Indians. A historical marker was also placed, which simply states “ Built in 1857 in Mankato Township and was moved to this site, which was once the site of the fur trading post of Henry H. Sibley by the Blue Earth County Historical Society in 1931.”

The cabin is no longer open for visitors to see inside, so some may find it less “interesting” than it was when first placed in Sibley. However, the history of the cabin leaves no doubt of its’ significance. George Ott himself may not have done anything especially incredible, but his tiny cabin still stands as a testament and reminder of the hardships endured by the pioneers of Blue Earth County. Years ago, they came and began laying the foundations for the Blue Earth County we know today, and their contributions and fortitude should not be overlooked or underestimated.