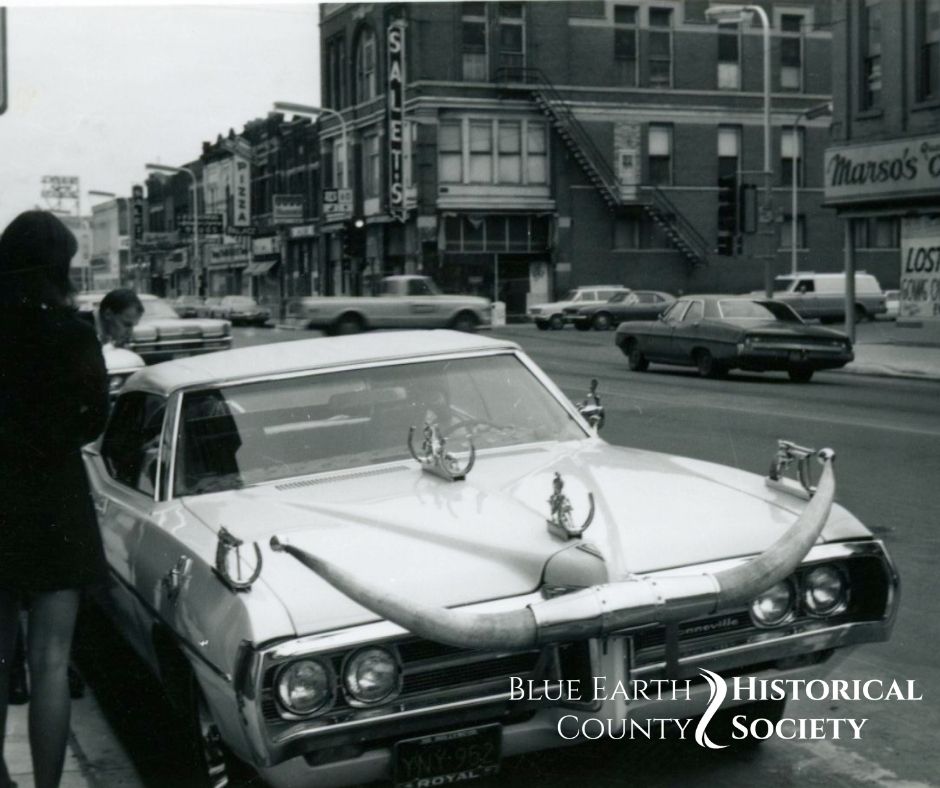 How does a man born in Russia, raised in New York, fashion tailor to Hollywood stars have any connection to Mankato, Minnesota?  The link was love, needles and thread, and fancy cars.

Nudka (Nudie) Cohen was born in Kiev, Russia in 1902.  His family immigrated to New York when he was young.  At sixteen he moved himself to California hoping to become a boxer but began to pick up bit parts in movies.  To supplement his income, Nudie began making outfits to order.  Gloria Swanson was one of his first customers.

In 1928, Nudie decided to hitchhike back to Brooklyn to visit his family and passed through Mankato.  Here he met Helen (Bobby) Kruger whose parents ran the boarding house where he stayed.  Returning to New York together, Nudie may have run a lingerie business for a few years, and perhaps made specialty customs for strippers.  They returned to Mankato in the early 1930s where Nudie became a tailor at Matt J. Graif Clothiers, later opening his own cleaning and tailoring establishment.

Not ready to settle down in Mankato, they sold the shop in 1940 and headed back to Hollywood.  Working for other tailors, Nudie noticed that western wear was becoming popular.  Hank Williams was his first celebrity customer.  Williams gave him a saddle, which Nudie sold to purchase a sewing machine and set up his own shop.  In 1947, he opened Nudie’s Rodeo Tailors of Hollywood, selling chain stitched embroidered and rhinestoned clothing, jewelry, cowboy hats, and saddles. Early customers included Hank Snow, Hopalong Cassidy, Jay Silverheels, Merle Travis, and Glen Ford.

It was Nudie who make Elvis Presley’s 24k gold lame rhinestone suit in the late 1950s, at a cost of $10,000.  Diana Ross, Michael Jackson, Liberace, Dolly Parton, and even John Lennon were among those who dressed in his fashions in the 1960s.  Elton John wore Nudie’s suits, including when he met the queen.

The book 100 Years of Western Wear, written by Taylor Beard, includes an entry for Nudie Cohn.  It also pictures a Hank Thompson crimson leather jacket with silver metallic leather and rhinestones from the early 50’s, now on display in the Country Music Hall of Fame collection.

Other photos of his flamboyant designs can be found on-line.

Nudie and Bobby Nudie, as he called his wife, did not forget Mankato.  Ken Berg, writing in the Free Press remembered that the two “drove in once to show off his flagrant horned vehicle.”  Nudie drove Cadillacs, Berg said, and this one was a convertible with chrome six-guns for the door handles and gear shift.  There were cow horns and rifles on the hood and silver dollars set into the upholstery.  Nudie drove the car past the newspaper office so a picture could be taken of him waving his white hat and astride the back seat.

Nudie professed that, although he was from Brooklyn, he had always liked horses and wearing Western clothes.  He was quoted in the Free Press saying “the best thing in the world is to go into your own business—tailoring – and wear your own clothes.  If you don’t sell ‘em, at least you can wear ‘em.”

Nudie Cohen passed away in 1984.  Dale Evans gave the eulogy at his funeral.  He had been the custom tailor for Roy Rogers and Dale Evans, and the couples had become friends.  Bobby continued the business, with her granddaughter Jamie, until 1994.  She passed away in 2006.