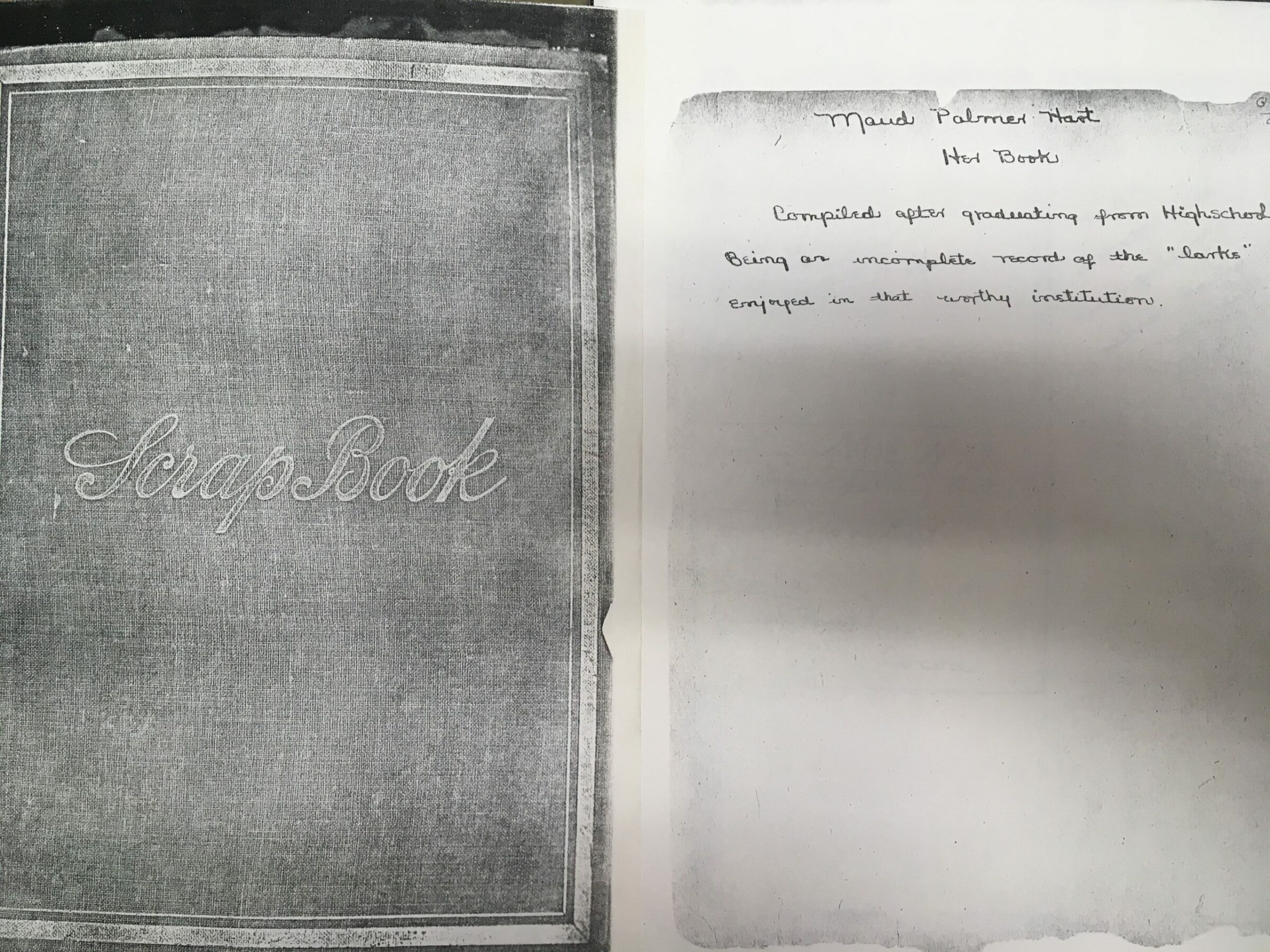 Sifting through a copy of the famous Mankato writer’s scrapbook, it feels as though I’m being transported into the mind of the quirky, seemingly precocious, sixteen-year old Betsy Ray.  Lovelace’s simply bound, scruffy book, with the curly cursive letters Scrap Book on the cover, now over one hundred years old, reveals her choice of silly poems and mementos largely “compiled after graduating from High school.” Following the first inscription is written: “Being an incomplete record of the ‘larks’ enjoyed in that worthy institution.”  Among the first pages is a folded piece of paper with her writing that sarcastically reads, “my masterpiece was produced this early!” accompanying a mysterious supper menu from a hotel.

Her scrapbook is filled with exactly what you’d expect from a recent graduate: cut-outs from the list of names in the Junior-Senior Banquet, school play programs, notes from friends, parodies on popular songs, and a program from the commencement ceremony for the Mankato (Deep Valley) High School’s Class of 1910. All of the achievements she’s most proud of lie tucked within these pages. There are also the bits and pieces that would have tumbled out every time she opened the book: love letters and their envelopes, pressed flowers, and newspaper clippings. A silly little slip of paper, clearly worth saving, reads, “We the under signed do here by request that Miss Maude refrain from making eyes at Zelona”. Among the names of girls who signed the petition, Frances Kenney (Tacy) stands out with the phrase “I am jealous” written next to her name. Far from a Lovelace expert am I, for I am unsure whether Zelona was his real name or a code one. I like to think the latter.

It’s hard not to fall for this charming young woman and all her endearing accomplishments and embarrassments before graduating. It is hardly difficult to picture a group of teenagers barely holding back bursts of laughter in class, teasing one another about boys, sharing everything when they were together, and laughing until they cried at nonsensical stories. It reminds me of the very reason why we love her books so very much. They are able to grant the reader a real connection, a good laugh or two, and a reassuring sense that the world we live in today really isn’t too different from the world of Betsy and Tacy. So whether you read the books fifty years ago or you’re just reading them now; whether you’re a history buff, a left-brained, or just a dairy farmer from Juno; whether you’re seven or eighty-seven; male or female, the stories come alive. They come alive with characters that never grow old or stay behind in the past century and that will never, ever fail to bring a smile to our faces.

A copy of this scrapbook is available to be viewed in the Research Center. Visit our online store to purchase copies of the Betsy-Tacy series.

About Maud Hart Lovelace
Maud was born in Mankato in 1892. Even as a young girl, she was often writing. Her first novel, The Black Angels, was published in 1926. She is best known for her Betsy-Tacy series. The series is set in Deep Valley, Minnesota based on Mankato. In fact, all of the characters and places found in the series are based on real people and places in Mankato, including Maud as Betsy.

Maud married Delos Lovelace, also a writer, in 1917. The couple had one daughter, Merian. Maud died in Claremont, California in 1980. She is buried in Glenwood Cemetery in Mankato, Minnesota.