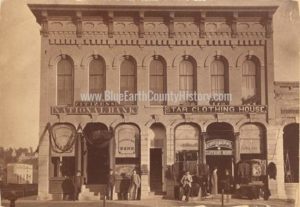 Blue Earth County has a long history of banking. Banks were formed, moved, renamed, and merged together countless times and Mankato’s Wells Fargo Bank is no exception. Mankato’s Wells Fargo started as Citizens National Bank in 1872 on the corner of Front and Walnut Streets. Twenty years later, Citizens National changed its name to National Citizens Bank of Mankato. Nineteen days before the stock markets crashed in 1929, National Citizens Bank became a member of Northwest Bancorporation, a fortunate move as it helped ease the blow of the Great Depression by providing more financial stability. The depression forced many banks in Mankato to close temporarily; however, National Citizens was able to provide regular service to their customers. The bank did close for the Emergency Bank Act in 1933 as a part of Franklin D. Roosevelt’s plan but was not closed for any other portion of the Great Depression.

Yet another name change occurred in May 1983 when Northwestern Bank became Norwest. The latest change meant new signage and marked the end of the weather ball. Also in 1983, Norwest began using the Cirrus Automatic Teller Machines (ATMs) system, which allowed people with a cash card to access their accounts where ever there was a Cirrus ATM. Within a year, Cirrus ATMs were installed in Mankato and North Mankato. This new service allowed Norwest customers access to cash withdrawals outside of business hours. It was around this time that banks began working to develop a card to pay for goods directly from the customer’s checking or savings accounts.

In June 1998, Norwest announced they were merging with Wells Fargo and in 2000 the official re-naming took place. Since that time, the Wells Fargo Stage Coach has been in Mankato at least twice; once after the official name change in 2000 and again in 2010 to celebrate the opening of the new Wells Fargo location next to Kohls.