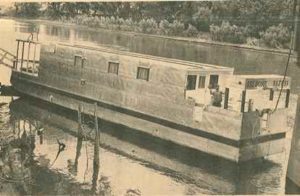 While some people find comfort and fun building model boats, for one Mankato man, this wasn’t enough. Charles “Charlie” Poliquin built a full-scale boat in 1958, becoming “Minnesota’s most memorable sailor.”

Charlie’s boat, which he christened the See Scout, was 70 feet long and displaced 30 tons. It was wooden, with metal jacketing on the outside, and powered by a tractor engine. Charlie hoped to sail it to South America, despite critics’ heckling, but he ran into trouble the first time he set sail in the Minnesota River. He had constructed the boat just north of the Main Street Bridge in North Mankato, but when he winched it into the water July of 1958, he ran aground on a sandbar and was stuck all winter.

In April 1959, Charlie managed to free his boat with the help of the spring runoff. He made it St. Peter 60 days later, after a slow, sandbar-filled trip. But he still had far to go before he hit South America. For one thing, the Coast Guard had ordered steering improvements, threatening to blow up the See Scout if it got stuck much more. Charlie managed to raise the necessary boat improvement funds by hosting 4,000 visitors at 25 cents a tour.

By October 1959, Charlie had floated down the Mississippi River and made it to New Orleans. However, by then he had realized his boat had too many “serious design problems” to make it to South America safely. He tore it up for scrap while it was still in New Orleans.