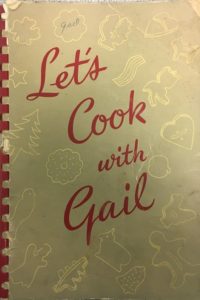 Do you know anyone who learned to cook along with Gail Palmby and her recipes, published in The Farmer Magazine in the 1950’s.  Perhaps you learned to make “Toad in the Hole” with a slice of bread and an egg.  Or “Braised Pork Chops,” using lard, a product of any farm that raised hogs.  A column entitled “Let’s Cook with Gail” was published monthly between September, 1952 and September 1954.  A spiral-bound booklet could be purchased into which the monthly features were pasted.  A booklet was also published in early 1954 with all the preceding columns, and room for the remaining columns.

Gail was 11 when the cooking features began to appear.  The daughter of Janet and Clarence Palmby, she lived on a farm just out of Garden City, attended school in Garden City, was a member of the Keen Klover 4-H club, and her family were active in the Methodist Church in Vernon Center.  The recipes, with helpful hints, were the work of Gail and her mother.  She told her readers that she had been cooking since she was 7 years old.  She started helping her mother set the table.  Gail had two younger brothers, Phil and Tom, who sometimes appear in pictures in the booklet, but more often are mentioned as tasters!

The recipes included everything from cakes and candy to cooking meats and making jams and jellys.  Columns were also filled with helpful hints like how to separate an egg yolk from the white or safety tips when making candy.  This is the booklet’s hints on sandwich making:  “Sandwiches are nicer if the slices of bread are matched.  Take two slices of bread and open them like a book.  Butter both slices thinly clear to the very edge.  Spread the filling to the very edge, also.  Put the slices of bread together again, and cut in half, across from corner to corner.”   Gail could have offered that advice when she wrote about taking lunch to her dad in the field.

The cooking lessons ended, perhaps because the family moved to Washington, DC where her father became Director of the Grain Division of the Commodity Stabilization Service in the Eisenhower Administration.  He later served as Assistant Secretary of Agriculture for International Affairs and Commodity Programs in the Nixon Administration.  In 1972 Clarence and Janet moved to Manhattan where he was Senior Vice President for Continental Grain Company.

The Palmby grandparents, Addie and Ernest, moved to Blue Earth County in 1920.  Although Janet and Clarence returned to Minnesota in retirement, they did not live in the county.  Gail Palmby Geidl passed away in 1994.