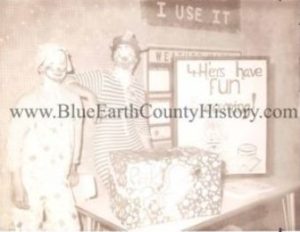 A.B. Graham was credited with founding 4-H clubs in Ohio in 1902.  In 1912, T.A. Erickson, a rural school specialist at the University of Minnesota, started the first club in Minnesota with 200 boys and girls.  Blue Earth County became involved in 1918 when Maynard E. Coe was hired as the first 4-H Extension agent.

It wasn’t until 1924 that the 4-Hs (Head, Heart Hands & Health) and the cloverleaf symbol became widely used.  Prior to that, the clubs were known as Boys and Girls Canning Clubs.

The interest of 4-H club members in animal husbandry is well-known.  The prize pig, calf, rooster, or lamb, raised by farm boys and girls to be exhibited at the county or state fairs has often provided a charming photo for the local newspaper.

In 1932, the annual achievement day was held at Franklin Auditorium in Mankato.  The Butternut Boosters 4-H Club saw Alice Ann Williams crowned as sewing champion.  As county champ, she attended and competed at the Minnesota State Fair.

Ninety-nine girls from each of the 4-H clubs of Blue Earth County exhibited their sewing articles which were judged by Mrs. Kari Aaberg of Mankato.  The county champ was determined on the quality of workmanship and fit of the complete garment.

A short play, “Romance of the Clover Leaf,” written and directed by Dorothea Beise and presented by the Franklin Ever Busy Club of Mankato also was presented at the 1932 Achievement Day.  Irene Royer of Shelby-Sterling Straight Shooters Club led the 400 girls, parents, and friends who attended the community song.

Hear more about the Blue Earth County Fair with this podcast.