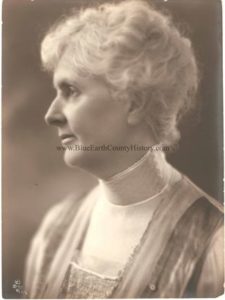 Dr. Helen was truly a light of the first magnitude in southern Minnesota.  She was a medical doctor and a very active worker in social welfare in an era in which the “woman’s place was in the home.”

Helen Hughes was born in 1863, one of ten children, at Belford, Prince Edward Island, now a province of Canada.  Here she grew up and was educated.  She emigrated with at least part of her siblings to the United States and entered the University of Michigan in 1892.  Helen received her M.D. degree from the University of Minnesota in 1896.  Her first medical practice was in the city of Blue Earth.  This was followed by a trip to Europe for further study.  On her return, she located in Mankato; and, in 1900 she, with her sister, also a medical doctor, Janes Hughes, established the first maternity hospital in Mankato and operated it until St. Joseph’s Hospital incorporated a maternity department in its service.

In 1910 Helen Hughes married Dr. J.R. Hielscher and continued her practice until 1920 when she took up preventive medicine and public health work.  Her husband, born in 1864 at present LeCenter, Minnesota, had also taken his M.D. degree at the University of Minnesota.

Helen’s work in social welfare was prodigious.  She organized in 1919 a group of mothers, wives, and daughters of American Legion members in Mankato, and then in St. Paul, to consider forming an auxiliary of the Legion.  She said her motive in organizing the auxiliary was to bring simple comfort to the Great War’s sick and disabled.  The women organized money and clothing drives for the soldiers.  Helen’s motto was, “our highest ambition was to form groups of women who, without offending officials involved, would slip into hospitals, speak kindly to patients and establish friendly contact.”  Late in her life, in 1935, Helen went to bat for the cause of child welfare.  She directed the American Legion Auxiliary to support county nurses in this campaign.

Helen organized the first department of the American Legion Auxiliary in Minnesota, and the revolving fund for the assistance of tubercular soldiers.  Dr. Helen (as she was familiarly called) also served on the national committee of the American Legion Auxiliary, and as the national chairperson of rehabilitation.  She was also a life member of the Minnesota Department Auxiliary executive committee and served as its historian.  Minnesota Council of Catholic Women elected Helen chairperson of its Department of Welfare and Blue Earth County Welfare Association elected her President.  And so continues the list of Helen’s achievements, including membership on the State Board of Health shortly before her death.

Dr. Helen suffered an attack of bronchial pneumonia and died at St. Joseph’s Hospital on May 31, 1935.  Her sister, Dr. Jane, survived her until 1941 when she died in Madison Lake.  Helen’s funeral was held at what was called the Irish Catholic Church, officially St. John The Baptist Catholic Church on South Broad Street, where Hickory Tech is now located.

Next time you buy a Buddy Poppy on Memorial Day, consider that this project was initiated in Mankato by Dr. Helen Hughes Hielscher.