Excerpt from The Heritage of Blue Earth County by Julie Schrader, Topic 111, available in the Research & Genealogy Center. 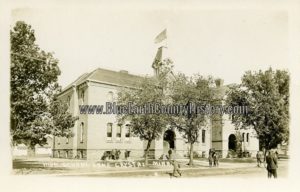 “The development of education in Lake Crystal is unusually interesting, dating back to the beginning of the city when the “three R’s” were taught in a little log school house on the shore of Crystal Lake. A man by the name of Gleason was the first teacher.

“When the town was established, a frame building in what is now the city park, and a small four-room building on the present site served for educational purposes until in 1881 when agitations for a new school house was begun.

“Several public hearings were called by H. H. Hering, clerk of the school district at that time, and in the summer of 1881, a vote was taken resulting in favor of a building.

“A committee composed of Lorin Cray, W.P. Marsten and Norman Beebe was appointed to cooperate with the Board of Education in getting plans and specifications for the building of a new school house.

“Two lots were purchased for the railroad company for $100, the site of the first brick school building. Approximately $8000 was spent on construction.

“The original building was two stories high, containing two classrooms, two wardrobes and two closets on each floor. It was finished on the outside with red brick and the bell tower which topped the structure was considered a fine example of architecture. The rooms were heated with stoves, but the building was also furnished with conductors for a furnace, which was installed years later.”