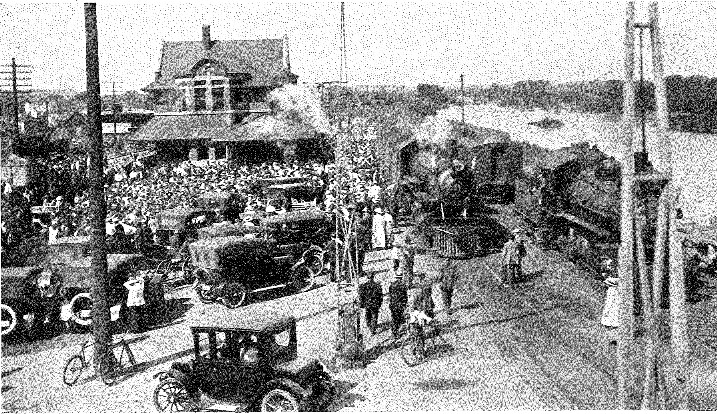 How does one celebrate the end of a war or Armistice Day?  With bells and whistles, and guns shot into the air if one is to use celebrations in Blues Earth County on November 11, 1918, as an example.

Some began celebrating too early.  A story, which the Free Press refused to print, reported that the armistice was signed on November 7.  It was true that the German armistice delegation had crossed the line in France on that day, but they had not yet reached the undisclosed site for negotiations.  Some anxiously awaiting good news may have been misled when whistles were blown to begin a planned one minute of prayer in Mankato.  The telephone exchange and newspaper were beset with calls wondering if the news of an armistice was true.  Whistles were blown, bells were rung, and a parade formed on Front Street, led by the Chief of Police.  The following day found eight men in the city jail, arrested for drunkenness and disorderly conduct from celebrating the false news. Mankato residents weren’t the only ones celebrating early.  Bells had been rung so strenuously in Mapleton that many were minus their ropes.  Although there had been no gatherings to celebrate the election results for state officers on the 6th because of influenza, news about the end of World War I seemed to put aside all fears of an epidemic.

Finally, on November 11, the headlines in the Free Press read, “Hostilities in World War Ended at 5:00 O’Clock this Morning.”  The paper had received the news from the Associated Press at 2:55 a.m.  The police were notified at 3:00 and tried to get the pumping station whistle working.  Failing that, an officer ran to the Omaha rail yards, and Engine 96 blasted the news.  It was reported that the Presbyterian Church bell was the first to ring, just as it had rung to announce the end of three previous wars: the Dakota Conflict, the Civil War, and the Spanish American War.

By 3:30 a.m. there were lights in most business places.  Hardware stores had opened so that people could buy shells for the revolvers and shotguns they had brought downtown to shoot off triumphant volleys.  There were several celebratory blasts in the quarries on the north end.  Cars tore up and down the main streets, with huge pieces of tin attached.  Fireworks leftover from the 4th found a good use. One car dragged a dummy of the Kaiser behind, and men with revolvers “filled his majesty with lead,” reported the paper.  The first parade of the day began by 3:20 a.m., with eleven men from the YMCA, still in their nightshirts.  They tried to enlarge their numbers at the Ben Pay and Saulpaugh hotels.  A writer for the paper described it “sounding as though the bedlam of the Western front had been transferred to Mankato.”

The mayors of Mankato and North Mankato proclaimed a half-holiday for schools and businesses, including the saloons which were to be closed in the afternoon for a celebration.  A parade formed at the armory at 2:30 in the afternoon led the police, Council Members, National Guards, Home Guard, Red Cross, fire department, vehicles representing local business, and almost three miles of cars. The Kaiser was hung at least twice on floats.

The Daily Review reported similar celebrations.  That paper had received a telegram from the United Press offices in St. Paul at 2:45 a.m.  The editor had tried to call the mayor, who slept through the ringing phone.  He then called the police department, who sent someone to ring the Presbyterian Church bell.  The whistle at Hubbard Mill started at 3:00, and by 3:30 the bell at St. John’s Episcopal Church was also ringing.

The afternoon was orderly, and George Palmer, president of the Mankato Chapter of the Red Cross, was able to make a plea for the United War Work Campaign to continue to offer aid to troops, but the evening, reported the paper, became “one great carnival.”  An effigy of the Kaiser was judged and hung on scaffolding at Union Station.  Although the head unexpectedly detached from the body, it was reattached and shot through with 250 shells.  The remains were then burned.  The Review estimated 10,000 spectators on the platform, riverbank, and bridge.

Not all the celebrating was confined to Mankato.  By daybreak, anvils were fired into the air with gunpowder, bells rang and whistles blew in Vernon Center.  Stores, banks, and schools were closed, and at 1:00 all the churches held a service of thanksgiving.  At 2:00 the population of the town gathered at the school and, led by a fife and drum and improvised band, they marched up and down the main streets, ending at the flag pole at the post office.  Singing, speeches, and an original poem by Mrs. Rembrey followed.  An image of the Kaiser was hanged, shot full of holes, pelted with rocks, and stomped into the mud by some young boys.  In the evening there was a huge bonfire with a barbecue and dance.  People from as far away as Madelia joined the celebration.

Good Thunder also announced the news with bells, whistles, and yelling.  Businesses closed in the afternoon, and the Ladies of the Red Cross Chapter organized a parade with flags, pennants, and the singing of patriotic songs.

Congressman Franklin Ellsworth, speaking to the gathering in Mankato, proclaimed November 11 as “a date which will go down in history as marking the greatest Victory of all times.”

For about the First Presbyterian Church or the World War I marker at Sibley Park, listen to our podcasts on those topics.