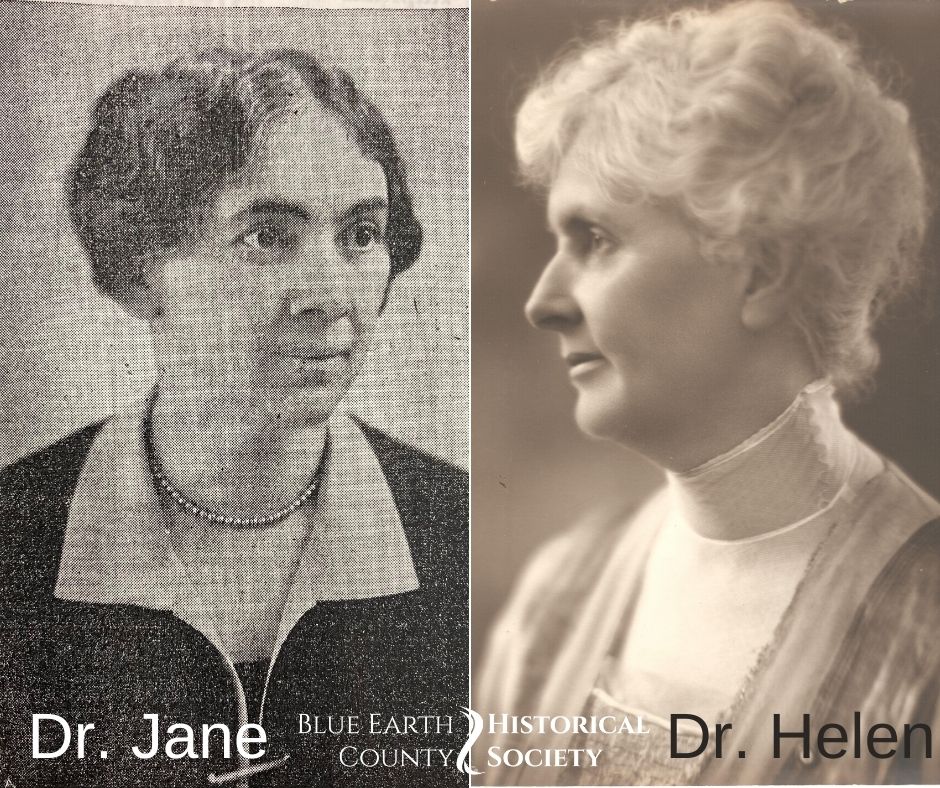 The Hughes sisters were born in Prince Edward Island, into a family of ten children.  Helen, the older of the two, graduated from the University of Michigan in 1892 and received her medical degree from the University of Minnesota in 1896.  She originally practiced in Blue Earth, where her mother and younger sister had come to live with her brother, Father Robert Hughes.  Dr. Helen moved her practice to Mankato in 1900.  Father Hughes, and another brother, Father Daniel Hughes, both served St. John the Baptist Catholic Church in Mankato in the early 1900s.

Jane followed her sister to medical school at the University of Minnesota, graduating in 1902, joining the practice of Andrews, Holbrook, and Hughes.  She left that practice in 1905 to join with her sister in opening a maternity hospital.  The hospital was located on the eastern edge of the city, in the S.F. Barney house.  The hospital had facilities for as many as 15-16 persons at any one time.  The sisters had plans to add a gaslighting plant and sewerage system to the facility.  Opening in October 1905, it closed a little over a year later, in December of 1906, when St. Joseph’s Hospital opened a maternity ward.  The two sisters remained in practice together.

Dr. Helen was married in 1912, to Dr. J. A. (Julius) Hielscher.  She continued to practice until 1920 and then turned her attention to preventive medicine and public health.   In 1919 she formed an auxiliary of the American Legion, the first in Minnesota. Her husband, who had served in the First World War, advocated at the National Legion Convention, held in November that year in Minneapolis, that the Legion establish such a group.  The American Legion Auxiliary brought together several existing women’s organizations.  Dr. Helen served as the first national director of the organization.  She was especially interested in providing help for sick and disabled veterans, and also served as the national chairman of rehabilitation.  In response to numerous complaints, Dr. Helen toured Veteran’s Hospitals in the 1930s to learn more about the conditions therein.  Dr. Helen also initiated the selling of poppies, made by sick soldiers, using the profits to help them and their families.

Besides her concern for veterans and their families, Dr. Helen supported public health nursing, serving as President of the Blue Earth County Welfare Association, and as a member of the State Board of Health until her death.

Dr. Helen passed away in May 1935, from Bronchial Pneumonia.  Not only was she remember for her work for veterans and in public health, but she was also remembered as a poet. Her book, Songs of the Son of Isai, a metrical form of the Psalms, was dedicated to her brother.  A memorial for Dr. Helen Hughes Hielscher was dedicated in Tourtellotte Park in 1966, which calls her the founder of the American Legion Auxiliary.

Dr. Jane continued to practice until 1912, two years after she married Michael L. Sullivan. In the 1920s, with her sister, she founded the Monday Study Club, a Catholic Women’s Organization.  She and her sister were also instrumental in raising funds for the establishment of a Newman Center at Mankato Teacher’s College.  The son of the Sullivan’s, John, practiced as a Podiatrist in Mankato until his retirement in 1978.  Their daughter joined The Sisters of the Good Shepherd of Omaha. Jane died rather suddenly in July 1941, of a heart ailment.    She was especially remembered for her work with the Red Cross during the First World War.  It was said that she taught half the town to knit.