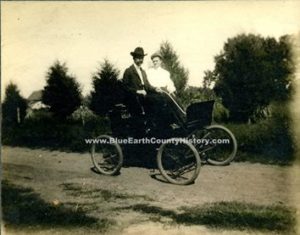 Excerpt from The Heritage of Blue Earth County by Julie Schrader, Topic 29, available in the Research & Genealogy Center.

“Quite in contrast to this was the reception accorded to the first factory-built automobile when it arrived in Mankato in 1897.

“It was a Stanley Stamer and as soon as the steam was up it was taken out into the street through the crowd which had congregated to witness the takeoff. A lot of people also watched from the sidewalks all through town as the car was driven along the streets.

“Fowles says it was a big event and that he and Alex with a number of other boys and men followed it around town on their bicycles the rest of the day at the terrific speed of six to eight miles per hour. The missed a good dinner and were pretty tired that night but that made little difference considering the special event.”