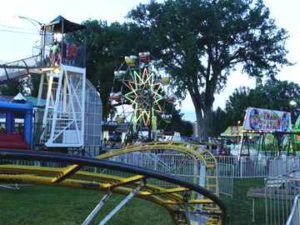 This year North Mankato will celebrate its fifty-fourth Fun Days, or its fifty-fifth depending on whose history you read.  There was definitely a three-day celebration in 1964, from July 30 through August 1, called North Mankato Days.   It encompassed all the usual town festival events; bingo, pony rides, a dunking stand, a teen dance with the band Jesters , and the Terry Powell Dixielanders for the adults.  The Free Press even recorded that 8,200 cups of 3.2 beer were sold.  In spite of raining out some events on Friday night, the celebration was considered a success, and it was expected that this would become an annual affair.  The paper called this North Mankato’s First Annual Celebration.

April of 1965 saw heroic efforts to keep the city of North Mankato from flooding, as it had fourteen years earlier.  By early June, it was time to hold a party.  A one-day event, on June 7, was called “Operation Thank You”.  It was designed as a way to show appreciation to those who had worked so hard on the dikes and all the other activities associated with flood prevention.  A public invitation was extended to the several thousand high school and college students who had given so much time and energy to flood prevention.  There was no formal program planned, only the expectation that North Mankato residents would personally thank the workers.  Three bands provided music for street dancing on the 200 block of Belgrade Avenue, and free hot dogs and soft drinks were available.  Almost 8,000 hotdogs were consumed by an estimated 7,500 flood workers.   Both the 1964 and 1965 events were sponsored by the North Mankato Civic and Commerce Association, under the chairmanship of Bob Gardner

The summer celebration, now called North Mankato Fun Days, has been held yearly since those first two events, although it almost died in 1975 when the Civic and Commerce Association considered disbanding.  The 1976 celebration was held in conjunction with the United States Bicentennial and expected an attendance of 30,000 to 35,000 people.  A new event that year was square dancing on the tennis courts, including a group of wheelchair dancers.  In 1998 the centennial of the city’s incorporation was celebrated.  The 2003 Fun Days included the reunion of World War II, Korean and present-day veterans of the 135th Infantry.  Beginning in 2006, a special needs carnival was held one morning each year.  Fun Days will be held this year July 10-July 14.