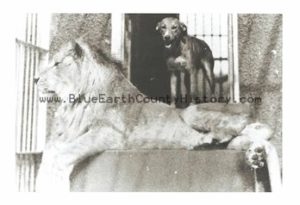 While it may seem impossible for a little dog and a big cat to be best friends, at Mankato’s Sibley Park Zoo, that’s exactly what happened in the early ’30s. For 10 years, from 1932 to 1942, Mutt the lion and Jeff the dog were inseparable.

Mutt was born to zoo lions Brutus and Mary in 1932. However, Mary turned out to be a less-than-ideal mother, pushing Mutt away by the time he was 2. Zookeepers removed the lion to his own cage, but they were worried he’d get lonely. Someone suggested giving him a playmate and someone else suggested a puppy named Jeff. It was a match made in heaven.

While some worried that Mutt would harm his little friend, the two got along exceedingly well. In fact, some newspaper articles from the ’30s bragged about Jeff controlling Mutt, such as when the dog broke up a fight between Mutt and Brutus, who were scrapping between the bard of their cages.

Word spread about the unusual friendship, bringing in spectators from across the country and even catching the attention of Robert Ripley, who featured the pair of pals on his newspaper comic “Believe it or Not!” The Como Park Zoo in St. Paul borrowed them for a time, becoming so impressed with the duo that the Como zookeeper asked to take them to the World’s Fair.

The two animals remained inseparable until Mutt’s death in late March 1942. The lion had developed an incurable hernia and was in great pain. After Mutt was euthanized, Jeff was inconsolable. Zoo workers tried to introduce a new lion cub friend, but it wasn’t the same.