The Laying of the Mankato Public Library Cornerstone

The Laying of the Mankato Public Library Cornerstone 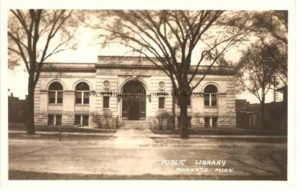 Today’s outstanding Blue Earth County Library System is a complex, comprehensive, and multi-service institution that began as a simple idea generated by a small group of innovative, community-minded individuals. During the spring of 1894, members of the Mankato City Council unanimously passed a resolution to create a free public library. The council decided that this newly established library was to be housed in the YMCA building on South Front Street. Mankato’s mayor at that time, Edgar (Ed) Weaver, appointed a nine-member library board and hired Minnie McGraw as the library’s first librarian. At a salary of $25 per month, she looked after the 2000 donated books.

In 1901, the library board passed a resolution to accept a $40,000 gift from steel industrialist and philanthropist Andrew Carnegie to construct a library building. Carnegie supported many such projects across America and by 1919 he had provided funds for 64 libraries in Minnesota alone and over 1500 nationwide, including the New York Public Library. Some conditions accompanied Carnegie’s financial offer. The city had to demonstrate a need for a public library and provide a building site. In addition, the city was required to set aside $4,000 a year—10 percent of the gift—for the library’s upkeep.  Finally, and most importantly, services provided by the library were to be free to all citizens.

The New York City architectural firm of Jardine, Kent, and Jardine was hired to design the library building. With some modifications, the library board accepted their plan and J. B. Nelson and Company was hired to construct the building at 120 South Broad Street, a site provided by the city. Hugh McMurtrie served as superintendent of the building project for the J.B. Nelson Company.

Construction began, and the library’s cornerstone was put in place on July 2, 1902. A parade and formal ceremony, also commemorating the 50th anniversary of the founding of the city, brought in hundreds of people from around Mankato and nearby communities. Mankato Public Library Board directors J.C. Thro and E.L. Patterson signed a building project resolution, which included the following statement:  It is our prayer that Almighty God, Maker of all things guide and direct our work, that it may be brought to a successful completion, that He bless and preserve for all time this gift that it may shed eternal light in our midst.

A box of items, mostly Mankato memorabilia, was assembled and laid within the cornerstone. The box contained, for example, information about the history of the library and copies of current publications including the Mankato Weekly Review, Review, Daily Free Press, Mankato Post, Mankato Journal, and Mankato Weekly Ledger. Also included in the box were a picture from the Review of the 1865 hangings of 38 Dakota Indians, a copy of C.A. Chapman’s History of Mankato Lodge #12, and a business card from the contractor, J.B. Nelson and Company.

A. D. Countryman of the Grand Lodge of Minnesota Masons spoke as the cornerstone was laid: Be it then known that this structure was built upon the foundation of the great principles of education, the foundation stone of our great and powerful republic, the pride and glory of the nations of the earth. All those taking part in these ceremonies . . . pray that these high and lofty principles of public benefit and virtues may stand first and foremost forever among the peoples of the earth.